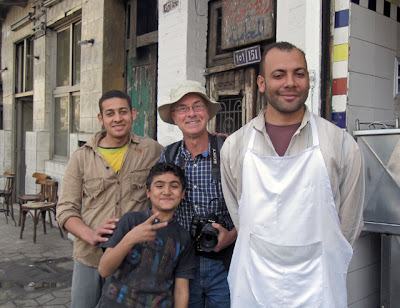 Today I was walking around Cairo and several guys wanted me to take their photo. This happens sometimes in Egypt. In other countries it is not unusual for children to want their photo taken, but here it is even adults, sometimes. On the other hand, there are even more who react angrily if they even see a camera. Afterwards they wanted a photo with me. The friendliest guy used my digicam to take this photo. Unfortunately, he is not in it since he took the photo, but I have a photo of him and the others from my DSLR. No one could speak English, but they were fun and since I was lost and looking for the Al-Azhar Mosque they pointed me in the general direction.

I love just wandering around and getting lost in big cities. I have done it many times in Tokyo, in Bangkok, Paris, London, Rome, Saigon, Vienna, Munich, Budapest, Athens, Quito, Marrakech, Tangier, etc. and now Cairo too!
Posted by Henry Richardson at 5:06 AM