I flirted with a Pentax K7

I flirted with the Pentax K7 this month and I thought some people might be interested in what I found. I got a fantastic deal for a new K7 + 18-55mm for US$855 with free shipping and no tax. I had been giving some thought to getting one to try out so when I saw that deal I jumped on it. Sadly, I returned it yesterday. The only reason I returned it was because compared to my A700 at ISO 1600, 3200, and 6400 it was worse. In all other ways that I care about it was a very nice upgrade from the A700. A big bonus is that it was smaller so for travel that would be very welcome.

The camera and its features are really wonderful. Note, for other people very fast AF or fps or something else might be really important. I checked the things that were important to me and the only bad thing I discovered was the high ISO.

If the K7 had the Kx sensor or even the A550 sensor it would be really nice. For me though, I find that when I travel I use ISO 1600 and higher from time to time for people at night on the street, etc. so it is important. It sure was hard to return it, but I decided that even if I kept it I would end up picking up the A700 in preference for a trip and also that with the poor high ISO I wouldn't be motivated to buy any additional Pentax mount lenses. Maybe a K7 update will be out this year though and I bet Pentax addresses this one big shortcoming.
Posted by Henry Richardson at 9:23 PM No comments:

I was up in Vancouver, British Columbia for a couple of months, but now back on the road again! Here is Mt. Shasta with a crown of clouds in northern California this morning. 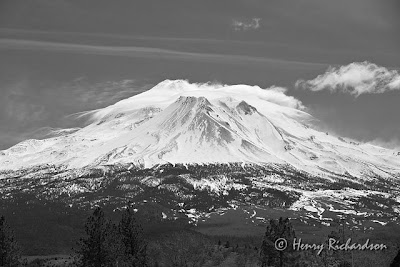 Posted by Henry Richardson at 9:58 PM No comments: