I got my lens back!

Last night I got my lens back! I figured the chances were only about 5%, but they found the lens and brought it back to Saigon for me. I was sure it was gone forever and I would not be able to use it on this trip. Also, I would have the dilemma of deciding whether I would buy a replacement when I get back to Hawaii. I don't want to buy any more lenses for the Sony mount because the company's direction with their cameras is so erratic. They have a point & shoot mentality and don't really understand photography, I think.
Posted by Henry Richardson at 6:14 PM 1 comment:

A few days ago I spent the night in Can Tho while in the Mekong Delta and in the morning I was in a hurry to get my stuff together in my hotel room so I could checkout. I accidentally left my Sony 11-18mm camera lens behind. :-( I didn't discover this until the next morning in Saigon though. For the last 2 days I have been trying to find out if the hotel staff found it and if so can I get it sent to me here in Saigon. The other complicating wrinkle is that I am leaving Saigon first thing in the morning. Well, the tentative good news is that this afternoon the hotel in Can Tho said they had found my lens and that they will give it to someone who is taking a bus to Saigon today (for other reasons) and that I can pick the lens up at 7:00 PM not far from where I am staying. I have my fingers crossed that all is well, there are no mistakes, and the lens is still in like new condition. I will know in a couple of hours, I suppose! Please, please!!!

Yesterday and today I continued wondering around Saigon with my camera. It is still very hot and humid so everytime I happen to be near my hotel I go in and take a cold shower. I guess that I have been averaging about 4-5 showers a day since I got here. :-)
Posted by Henry Richardson at 5:24 AM No comments:

My first few days in Vietnam

I just arrived in Ho Chi Minh City aka Saigon on Wednesday and it begins a month of travel in Vietnam. I was here for a month almost 11 years ago, but felt ready to return and, I hope, get some good photos. It sure is hot and humid here, not unexpected, but it has been almost 3 years since I was somewhere with this sort of climate (last time was Cambodia and Thailand) so my body is not acclimatized to it yet.

I took a few photos while walking around Wednesday afternoon, but it was the hottest time of the day so after an hour and a half (including a stop for a beer) I returned to my hotel for a cold shower and to relax in my aircon room. Thursday morning, early, about 6:00 AM I started wondering the streets. Of course, that early it is a bit cooler and most importantly there is a lot of morning activity to photograph. Then a stop for breakfast. After eating I was walking again and over a period of 30 minutes while walking in a park I was approached over and over by cyclo drivers hoping I would hire them to show me around. Finally, a guy that seemed particular easy going and whose English was a bit better approached me and I agreed to a particular route and price. We even wrote the price of 150,000 dong on a piece of paper to ensure there were no misunderstandings. From my experience you can do all of this and still at the end you discover you are dealing with a real jerk. Well, he didn't disappoint me. :-)

We rode around and stopped often so he could take a break under a tree, get something to drink, and talk with friends while I walked around to take photos. After 3 hours we were done and he suggested we stop at a little sidewalk place to have a "happy hour". I bought us each a beer and we talked some more. I noticed that planned or unplanned he had taken me to an almost deserted road with almost no traffic and no one walking on the sidewalk. Normally there are people everywhere in Saigon with many people walking along, bicycles, motorbikes, cars and a cacophony of sound. On this road on the edge of District 1 though it was quiet and almost deserted. I figured it probably meant nothing but I have traveled enough to know that this may not be a coincidence. Still, he was friendly and all seemed fine. Also, it was the middle of the afternoon. While we were sitting on the sidewalk drinking our beer he asked if I would write a note in a small notebook to recommend him. He had showed it to me earlier in the park and it had many comments from satisfied customers. I readily agreed and wrote a note. Then he asked me to go ahead and pay him and then he would take me back to the park where we had met.

When it comes time to pay you find out if you have an asshole on your hands. The moment of truth had arrived. I had a good time so decided to give him a 20,000 dong tip -- I figured he would appreciate that. I gave him the 150,000 dong plus the 20,000 dong tip and rather than be happy he became very agitated. He told me that I owed him 450,000 dong because the charge was 150,000 dong per hour. Of course, that was bullshit. We had very carefully gone over everything several times in the park. He had clearly pulled this scam many times because he seemed so practiced at the way he sprung it and the words he chose. With no hesitation I refused to pay him more. Guidebooks will tell you that in Southeast Asia people do not show anger and yell so you should also remain calm. Well, I can tell you that many times I have seen people in Southeast Asia angry and yelling at each other. Therefore, when this guy, his name was Tian, suddenly exploded and started yelling at me demanding I pay him the additional amount it made me angry too, but didn't seem particularly out of character for the culture. Be warned, guidebooks often have incorrect information. :-) I told him firmly and clearly that I would absolutely not give him anymore money. He had the 170,000 dong in his hand so I started to walk away. He grabbed my arm and pulled me back and in a very threatening way told me I could not leave. At this point I was beginning to think we may end up in a fight, but I stayed very firm and kept my eyes locked right on his. I told him to never touch me again and that he had two choices: 1) take the 170,000 dong or 2) we go find the police. He refused to get the police and told me they wouldn't and couldn't help me, but I insisted that I was going to find them and he could accompany me. He planted himself right in front of me and was very close blocking my way.

I hoped this wouldn't turn violent, but I decided that if this was going to then I guess it will happen and I started wondering how I would fare. He was about 20 years younger, maybe 2 inches shorter, but stockier. He was probably a kung-fu wizard though. :-) I hope he didn't have a knife. I also had my camera around my neck and started thinking that it would almost certainly get smashed and broken.

I told him again I was leaving and looked him straight in the eyes and said, "So, what are you going to do about it?" I wondered if this would be the point where he would turn violent. For the first time he got quiet and then looked down at the sidewalk. He was clearly thinking things over, probably thinking the same thing I was: Do I want this to turn into a fight? After a rather long delay he looked up and said he would take 200,000 dong and he would take me back to the park. I told him no that all he was getting was the 170,000 dong and he didn't even deserve the 20,000 dong tip, but I had already said I would give it to him so I wouldn't go back on my word. I told him to stay away from me and I would find my own way back. Although I didn't know where we were I knew it couldn't be too far so I walked until I found a road and turned to the left. Soon I was back in the heart of District 1 and about an hour later I found my way back to my hotel. I am sure he had pulled the scam many times and probably had been successful most of the time. He was good at trying to intimidate people. He failed this time though so I hope he hesitates a lot the next time. Although from time to time, especially in Egypt, I have had similar experiences, this one was probably the most intense. The world seems to be getting meaner. One misadventure in the can, I hope no more! :-)

Friday I left Saigon to head south into the amazing Mekong Delta. For the last two days I have been traveling mostly by boats on the river and watching and photographing all the hustle and bustle of life on this big river. Yesterday morning I took a boat going from Saigon to My Tho and then later on to Ben Tre. Had lunch at Ben Tre and did some exploring with my camera. By evening I got to Cat Tho to spend the night and this morning got up early to take a boat to the big Cai Rang floating market. I think I have gotten some pretty good photos. I got back to Saigon this evening and am glad to be in an aircon room again! It is so hot and humid here! I have been thinking about it and figure that maybe if I stay here 30 years or so then I might get acclimatized. :-)
Posted by Henry Richardson at 10:23 AM 2 comments:

It has been more than 10 years since I went to Vietnam last time, but I am going again on Monday for a month of travel. I hope I can get some good photos! Here are a couple of photos from when I was there last time. 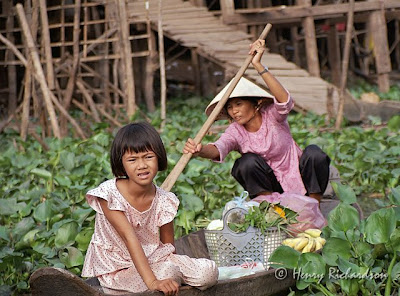 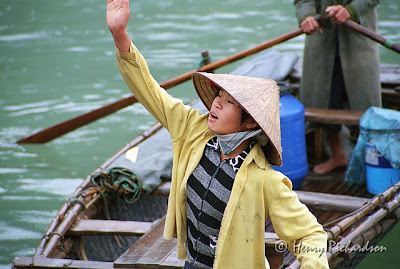 Posted by Henry Richardson at 8:42 AM No comments: