I made this short video on Waikiki Beach this morning. Please note the wonderful plot, character development, outstanding use of light and camera angles. A fine piece of work!

I hope all of you are having a very nice Thanksgiving.

Posted by Henry Richardson at 6:00 PM No comments: Links to this post

This particular one has an 8.9" screen, 1.6ghz Intel Atom cpu, 1gb ram, 160gb hd, WinXP. These days several companies are making these small, cheap notebook computers, but the Asus Eee PC line and Acer Aspire One line are probably the most popular.

There are various versions of the Eee PC and Aspire One, some with Linux, some with WinXP. Some with a HD (hard disk), some with an SSD (solid state disk). Various prices and screen sizes (7", 8.9", 10").

For awhile I had been thinking I would get one with an SSD instead of a HD and get Linux instead of WinXP, but the HD is much larger and with WinXP I can load some of my current software on it if I want.

I plan to use mine while traveling mostly for getting on the internet. These days lots of places have free wifi so it will be great. For example, recently in Thailand and Mexico we saw lots of free wifi. I can also download photos and look at them on a pretty good size screen (compared to the 3" LCD on the back of the camera) so that is a nice extra. It weighs about 2.4 pounds so that isn't too bad. Since 2003 I have been carrying my 30gb PSD (portable storage device) when I travel, but I won't have to carry it anymore so there isn't much weight or bulk gain, I think.

It is amazing how fast things have progressed. This cheap new netbook has the same amount of memory and same size hd as the HP WinXP desktop I bought 3 years ago. The cpu is a bit slower though.

Here is a photo of it sitting on top of my HP 17" notebook pc: 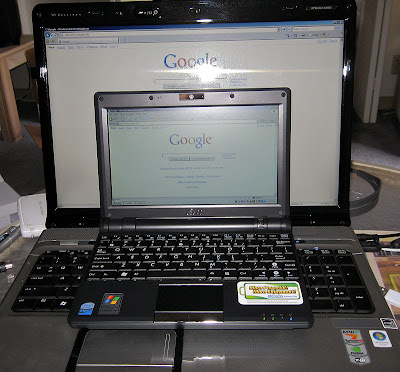 And here is a pretty cool video review:

Posted by Henry Richardson at 9:29 PM No comments: Links to this post